The RTE (Run Time Environment) of an .NET Application 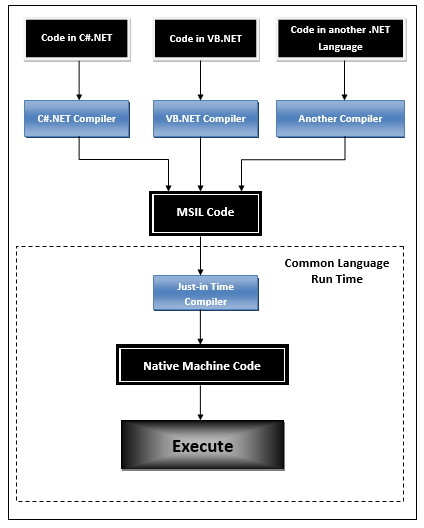  This is the initial and most component of CLR.
 Application security is much more important issues today.
 If you analyze this in-depth, we have 3 types of security support by .NET Framework.

A. Evidence Based Security (EBS):
• This security feature is meant for protecting entire assembly not to be accessed by un-authorized users.
• The “Security Manager” component first checks privileges of the current user that the user is allowed to access the assembly or not, based on the “evidence”.
• The evidence is nothing but the information about the security permissions related to the assembly, that resides with in the assembly.

B. Code Access Security (CAS):
• This verifies whether the current user is allowed to perform the actions written in the MSIL code.
• For example, accessing the file system, event log, printing, remote or network access etc.

2. JIT Compiler
 As you seen in the diagram of RTE previously, the “JIT” compiler is responsible for compiling the “MSIL” code into the “Native code”.
 The native code is directly understandable by the system hardware.

3. Memory Manager
 The “Memory Manager” component of CLR, allocates necessary memory for the variables and objects that are to be used by the application.

4. Garbage Collector
 This component of CLR, de-allocates or cleans-up the un-necessary memory of the application, after usage automatically.
 Instead, in older languages such as C/C++ this kind of component is not available so that the programmer should free-up the memory explicitly using some code.

5. Exception Manager
 An exception means “Run time error”.
 This component redirect the processor to execute the “catch” block or “finally” block, whenever an exception is occurred at run time.
 We can learn how to write these catch and finally blocks in C#.NET and VB.NET languages later.

Note: A “namespace” is a collection of few classes or namespaces. The inner namespaces, contained by another namespace is called as “sub namespace”. The most frequently used namespaces of FCL are listed here.